Scientists from the Institute play a key role in a broader interdisciplinary cooperation focused on design and development of biologically active carboranes and metallacarboranes. Inspired by previous design of metallacarborane family of specific HIV Protease inhibitors, we found that sulfamide carboranes can act as a promising class of selective inhibitors of Carbonic Anhydrase IX (CA IX) enzyme [1,2]. This enzyme is associated with solid hypoxic tumours and belongs to validated targets for cancer therapy and diagnostics. For structural optimizations, a broader scope of new methods for flexible C and B- site-directed modifications on (metalla)carboranes had been developed [1-4]. Some of these substitutions were further used in the synthesis of carboranes and cobalt bis(dicarbollide) ions with terminal sulfamide [1,2], sulfonamide and other similar groups, known to bind tightly to the zinc atom in the active site of CA-IX. The new generations of inorganic inhibitors of CA-IX are now accessible in 3 to 6 reactions steps, exhibit promising in vitro activities with corresponding Ki values in the low nanomolar range (20 pM for the most potent inhibitor). The Selectivity factor CAIX/CAII up to 668 and 1312 were observed within metallacarborane and carborane series, resp. The synchrotron structures of enzyme-inhibitor complexes determined in collaboration with the IMG CAS (See Figs. 1 and 2) provided rationale for observed SAR. In addition, studies of pharmacologically relevant factors such as plasma protein binding, cell membrane penetration, toxicology, and in vivo pharmacokinetic and mouse xenographs, carried out within collaboration with Institute of Molecular and Translational Medicine at Palacký University, Olomouc (IMTM), also confirmed promising properties of new compounds. These inhibitors are thus primarily considered as good candidates for development of drug formulations applicable in cancer treatment. 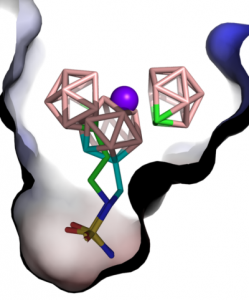 In view that basic view on behaviour of polyhedral species in living systems is rather limited, these studies are complemented by experimental, theoretical and physicochemical studies on various types of interactions of boron cages with components of living or model systems. These studies are carried out under joint collaboration with Jacobs University Bremen, Germany, IMTM Olomouc, IMG CAS and IOCB CAS and IBP CAS. A deeper attention is paid on interactions of substituted carboranes, cobalt bis(dicarbollide) and [B21H18]– with model platforms such as that showed formation β- and γ- cyclodextrins [4]. Collaboration with team at IBP CAS on understanding the electrochemical properties in aqueous solutions has been launched recently. The current aims are focused on the structural design which will allow for an easy, specific conjugation with biomacromolecules and tuning of the electrochemical window and response [5,6].