A new chemical compound, B18H20(NC5H5)2, the unusual molecular structure of which resembles a flying dragon with its body consisting of a cluster of boron hydride and two spread pyridine “wings”, was created by the Synthesis Department.

The molecule presents interesting photophysical properties. At room temperature, the solution of the compound emits russet light (620 nm) with an increased intensity caused by limited rotation of the “wings” – pyridine ligands. Cooling of the light down to 8 K causes another shift in the wavelength of the radiation, the colour changes to bright yellow (585 nm) and intensity doubles. After anchoring in polystyrene film, the excitation energy is absorbed at 414 nm and bright photo stable orange light is emitted. Fluorescence from a polystyrene film containing B18H20(NC5H5)2 may be stimulated also by emission from another fluorescent borane, anti-B18H22, by means of an energy transmission mechanism. Polystyrene membranes doped by a mix of anti-B18H22 a B18H20(NC5H5)2 in 1:1 ratio absorb light in a broad range of wavelengths from 250 to 500 nm and emit fluorescent light at 609 nm. This capacity could be used in the construction of luminescent solar concentrators – devices that can collect energy of light in a broad interval of frequencies and concentrate it for the emission of a single wavelength radiation. 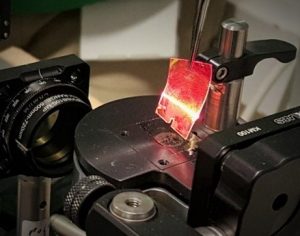 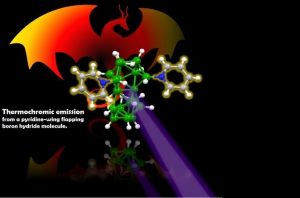 Emission of B18H20(NC5H5)2 in the form of a thin polystyrene film (left) and molecular structure of B18H20(NC5H5)2, with its borane body and pyridine wings that resemble a dragon (right). the molecule is activated by purple light and emits orange-red light.