To the memory of Professor Bohumil Štíbr

Bohumil Štíbr, everywhere known as Bob, was one of the founders of the unique Czech school of boron chemistry, established in the former Czechoslovakia at the
beginning of the 1960‘s. He does not need too much introduction, being known to every borane chemist in the world and also well-recognized and highly-considered
amongst Czech inorganic chemists generally.

Professor Bohumil Štíbr was born on July 17th, 1940 in Slaný, the ‘Town of Hops‘, as he used to say with his sense of humour. He graduated in Inorganic Chemistry
at the University of Pardubice in 1962, where he also pursued his PhD (= CSc.), finished in 1968 with a first-class degree award. Simultaneous to his studies, he was
also very active in the area of boron cluster chemistry at the Institute of Inorganic Chemistry (IIC) at Řež, where he was employed for decades, for 25 years as a head
of this group. In 1997 he defended his DrSc thesis. During his chairmanship of the international conference IMEBORON VI held at Bechyně, Czechoslovakia, in 1987,
he established, together with Profesor J. D. Kennedy (University of Leeds), the so-called ACPC (Anglo-Czech-Polyhedral-Club, sometimes alternatively referred to in jest
as the Anglo-Czech-Pivo (=Beer) –Club).

It would be like carrying coal to Newcastle to enumerate all others Bob‘s achievements in the area of boron cluster chemistry. They can be easily found in high-quality
chemical journals. For his great services to chemistry he was awarded two prizes by the Czech Academy of Sciences (1968, 2006) as well as the Alexander von Humboldt
Foundation prize (Bayreuth, 2001). Unfortunately, his last recognition, the most prestigeous Czech Academy of Sciences medal, „ De scientia et humanitate optime meritis“,
planned to be awarded him on the ocassion of his 80th’s birthday, will not reach him alive. Bob passed away on January 7th, 2020.

It will take some time when your leaving is fully realized but we promise that your trace, dear Bob, will remain in our souls as well as in your beloved boron chemistry as
uneraseable as a trace of Neil Armstrong in the powder of the Moon. 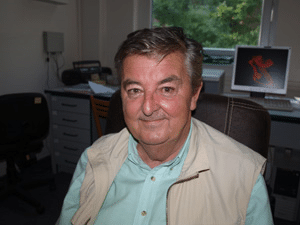